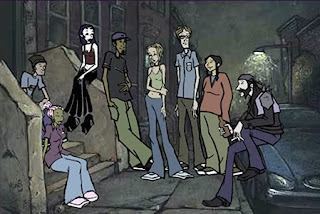 Image from Chris Prynowski's MTV Animation series "Downtown," a production from 1999, the last era where work was abundant enough to temporarily slow the flow of NY animation talent heading west.

In the 1960s Europe faced what became known as "the brain drain" as individuals with technical skills or knowledge emigrated to the United States and other places where they could earn more for their skills. Since 2008 or 2009, New York City animation has undergone what might be called "the frame drain," as some key animation talent has moved to Los Angeles to continue careers or, in some cases, start them.

For example, Kat Morris and Rebecca Sugar, two of the most talented animation artists to graduate SVA in recent memory, both headed west to take advantage of the greater opportunities out there. Venture Bros. director Ian Jones-Quartey recently split as did N.Y. stalwart and Codename: Kids Next Door creator Tom Warburton. Another departure was the amazing husband-wife team of Toni Tysen and Danny (Kano) Kimanyen. Indie superstars PES and Patrick Smith also got out of Dodge (to La-La-Land and Singapore, respectively).

Now I've heard word that four more of our brightest and best are planning to scoot (two because of scoring a two-year artists' residence in Europe) and two because of L.A.'s sweet siren call. Even as a booster of the N.Y. animation scene, I can't deny the advantages that Hollywood provides. For one thing, there's an actual animation industry there. When you work on a TV series for Cartoon Network, for instance, you work in a building bearing its name. When the series job comes to an end, there will likely be another job for you on another series down the hall or on the next floor. There hasn't been anything like that in NY since MTV Animation quietly shut down in 2001.

All this departing talent of the past two or three years could sound pretty disheartening to those of us remaining in the Big Apple, if not for one important thing: the natural renewal that is already in progress. Animation, like many industries, seems to have up cycles and down cycles.

At this point in time, I can happily report that most of my peers have either full or part time work. Even the most pessimistic among us would admit that things were a lot worse as recently as a year ago. How well this translates to opportunity for recent graduates is yet to be seen. I suspect there is still a long way to go in that area, but the arrival of new studios such as a Saatchi & Saatchi’s commercial animation division and the July 2010 arrival of the New York branch of Chris Prynowski's successful L.A.-based studio Titmouse, Inc., gives us reason to believe there's even more opportunity brewing for the second half of the year. Knock on wood.

Besides, New Yorkers departing for the West Coast is nothing new. It's been happening since Walt Disney first put California on the animation map. All of us animation folk are gypsies of a sort; whether we pack up and head west or not, we all exist from job to job, opportunity to opportunity. And, no matter what path we each take, we're still a part of the extended community that is New York animation.
Posted by David B. Levy at 11:56 AM

Well... NYC is about to add someone I would consider one of the most unique and promising animators to come along in a while, Ian Miller.

I don't think this mini-exodus has much to do with the amount of work available in New York.

It's greater economic issue, in part, a result of the "Sex in the City-ification" of the town.

Middle class careers like production artists have been completely priced out of middle class life.

Many people move to Los Angeles or Atlanta or Austin or San Diego not solely for the greener pastures of steady work but for a little plot of green in the back of the house.

Good to know, Tim. I remember seeing that film in Ottawa last year.

Interesting perspective on this, ROC. But, I think when it comes to L.A., it's not just the plot of green but the promise of a more consistent work flow. I sure do agree on middle class production artists being priced out, however. But, I suppose those that really want to stick around (and can't imagine living anywhere else) always find a way to make it work.

It's a mix of both of what Dave says and what Roconnor says. My wife and I have been fantasizing about LA life only because we just get tired of the cramped expensive life here. We want more for out money, a washer and dryer in the house/apt..and yes a little plot of green to grow vegetables and allow our little pup to run amok.

My wife works in TV/Film so of course the industry would be better for her there. I think i'd do fine as well.

Manahattan is for the young. If you want any space for an affordable cost, NY is not the place. Knowing you can get this space in LA is the allure; understanding that you can probably get work in the INDUSTRY (caps intended) is a nice backup.

To me LA will never have the allure of NY, but I do wish I had more space at home. And a plot of green.

I believe the frame drain is due to lack of INTERESTING work.

Many of the young talents you have mentioned are great draftsmen (draftswomen), with a lot of great visual styles to offer. I don't see how they could thrive in a town that has been primarily making shows by puppeting elements around in After Effects and Flash. It would be a waste of their talents, and they know it.

Sure, there are the occasional hand drawn shows like Super Jail, and in house productions like Venture Brothers, but this is not enough to keep young talents here.

Lets hope more interesting work comes to New York, and maybe we can lure some of these artists back!

Oh yeah, let's not forget that LA studios tend to pay higher salaries for their artists.

Those are powerful reasons and arguments for why this is happening. Although, the neat thing about New York is that we each make our own blend of opportunity in a way you don't see in L.A. But, if someone just wants to draw, period, you are dead-on that L.A. would be the place to do that.

But, just as NY has a shortage of great opportunities for good draftsman and draftswomen, so does L.A. have a shortage of good content to work on. After all, how many shows or projects there are Adventure Time?