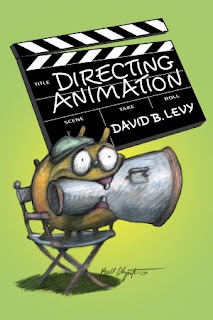 My new book, Directing Animation, flies onto shelves November 2, and boy will its arms be tired. Don't get me wrong, I know I'm not Chuck Jones, Richard Williams, or Preston Blair. First of all, two of them are dead, and one of them is in his 70s. And, since I don't have an AARP card in my wallet (yet), I can't be in this august company. But, what I have tried to do is write a book from the perspective of a working director, with six series, a half-dozen pilots, dozens of shorts for Sesame Workshop, as well as a smattering of indie films behind him as well as just about every mistake you can make, some of them with career-altering consequences.

I recently had lunch with a young animator who told of working on an animation gig at a studio where her director stayed bunkered in his office, only coming out to yell at his team or give vague direction. The director made it clear each day how angry and disappointed he was and how he wished to fire everyone on the crew. Stories like this are why I thought there was a need for this book, not that I hope to reform an individual like that, but you never know.

The education of an animator––from school, books, and instructional dvds, is all geared toward learning the craft of animation (bouncing balls to walk cycles, and advanced acting). The trouble is that at some point a gifted animator might be promoted to director where her duties will then require management, communication, and leadership skills. So all of a sudden a good animator is now expected or assumed to be a good boss. That's the basic and eternal challenge: Who better to direct animation than someone who's come up through production, starting as an animator or a storyboard artist responsible for only his/her own work, and hopefully having a full understanding of the entire production so to be able to be able to see the big picture as a director must. But what prepares him or her to take on all the roles and responsibilities of management?

I'm hopeful that Directing Animation can do some good in the industry (at the very least it's a juicy read full of anecdotes and warts-and-all stories), throwing an important spotlight on what might be the hardest part of directing animation to master: the people factor. Pixar legend Andrew Stanton told my NYU class that a journalist interviewed him about his upcoming experience directing the live-action feature film, John Carter on Mars, asking, "Are you nervous that you'll have to talk to people on set?" Stanton replied, "It's the same with animation. I don't talk to computers. They don't do the animation. I talk to people."
Posted by David B. Levy at 6:03 AM

You're absolutely right about school though. I never received any management training at all and must rely on my own people skills instead, which might not be up to scratch once I get some responsibilities!

The unfortunate thing is that some people learn from example and they can pick up some really bad habits in their early years.

Thanks a bunch, Charles!
And, I agree that people pick up bad habits by example, especially in their formative work years. There's a lot of poison mentors and toxic workplaces out there. It really makes me sad, but it also makes me appreciate all the good workplaces and bosses even more.

Looking forward to hearing your thoughts on the new book!

Congrats on your newest book! I love that Andrew Stanton quote at the end of your article.

Can't wait for this book, David!

I think the young animator in your story and I worked at the same studio.

I read your blog regularly and there's always something educational, inspirational and even entertaining in it.

This is a must read not just for aspiring directors but for everyone working in the industry.

That's quite a line-up of interviews you've got! I imagine there must be several different approaches to directing amongst that crowd. I'm looking forward to this one!

Thanks a lot, all! It's so nice to hear some are looking forward to this release. It's the kind of book I really could have used when I started directing, so I hope others will find it useful, informative, and thought-provoking.

You piqued my curiosity where you mention making "career-altering mistakes" - are any of them detailed in this book? I'd love to hear how you bounced back from them.

Oh, yes... the book is loaded with mistakes, including the career-altering ones. One key of bouncing back is to own your mistakes, to acknowledge your role in them and to want to turn that around the next chance you can. Looking forward to your thoughts on the new book.

As I begin full production on my first 3D animated feature, I'm going insane trying to find solid source material to help me through the minefield that lays before me. How I wish your book were available right now!

Thanks David for being so frank with your insights.

When people say certain jobs are about "politics" I'm pretty sure this is not what they had in mind.

I really enjoyed your first book - in fact, it's partly responsible for me getting into feature animation.

Looking forward to the new one.