Omissions and Other Misrepresentations 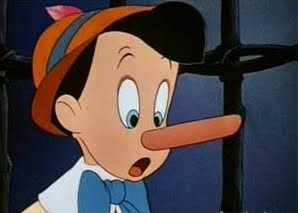 Over the years I've developed a pet peeve in this biz, concerning misrepresentation in resumes, bios, reels, etc. For instance, years ago, I knew of a guy who worked a few days at Nick Digital Animation in NYC, where as a digital animator, he was working on short promos for one of their animated TV series. He was given library files of characters based on the Los Angeles-based TV series production. This means that he was manipulating and re-aranging pre-made puppet pieces, and not animating in the same manner as the TV series of the same name.

The problem was that in his bio/resume he listed that series title under his animating experience, omitting that his actual work was NOT on the smash hit show of the same name but promos for it. At best this was a careless omission, but in all likelihood it was intentional, designed to deliberately mislead the reader of the bio or resume into making a false conclusion, elevating the person's connection to, or responsibility on, the project.

A correct and honest description of this gig (using Fairly OddParents as an example) in a resume would list this gig something like this:

Not quite as sexy as saying you worked on Fairly OddParents, but far more accurate.

Another problem that I've seen is that animators sometimes leave out the studio that they are working for and list the client instead as their employer. I understand the temptation to do this because the client's name is probably more famous than the small boutique animation studio you might be working for. And, the bigger the names on a resume the more points you get, right?

In reality, the client probably never met you since you were, in fact, working for a studio handling that client. At a later date when you're up for a direct job with them, the client might be very confused to see you listing them as an employer. It's okay to list the client but be sure to make it clear who you worked for, and you can't do that without listing the studio or individual that hired you. Don't omit the name or company of the actual employer that hired you. To do so is similar to biting the hand that feeds you.

Years ago, such "omissions" might only get you in hot water with one person or company at a time, but today our resumes and bios are online for all the word to see. Every time someone updates their Linked-In work history, those updates are e-mailed to every person you are connected to including the studio you've omitted in favor of the client. So the chance for damage caused by "omissions" is greatly magnified.

Another important thing, as hinted in the above Nick Digital story, is that you should also be honest and clear about the amount of time you spent on a project. Some projects, like Fairly OddParents the TV series, go on for a decade, so it's bad form to not be specific and explain not only what you did in connection with that project, but also how long you worked on it.

Worse than these omissions are, of course, out-and-out lies. I heard of one animation artist's bio that listed him as an animator at the world's most famous animation studio, when in fact his job was a fairly low-level job in production at a satellite location of the main studio, which was on a different coast! Clearly the goal here was to inflate his own legacy by allowing readers of his bio conclude that he worked in a high-level animation capacity for the main entity of the giant company. While some mistakes can be chalked up to innocent errors and inexperience in writing a bio or resume, the deliberate out-and-out lies are just attempts to get away with something.

We need to understand that we are all connected in this business and that new social and business networks online as well as the proliferation of portfolio blogs and personal websites have made all our choices public as never before. At the same time, the Internet has made it easy to research and double check this information whether it's calling up crew lists online or finding the phone number of someone at the studio to call and confirm with. Omissions and other such misrepresentations are an unnecessary risk no matter how you slice it.
Posted by David B. Levy at 2:43 PM

Like the products we (sometimes) get paid to advertise a certain of "puffery" (and believe it or not that's a legal term) is expected when presenting your work.

"I worked faster and cleaner than anyone else on the project." Et cetera.

In this business, the folks who do the hiring -at least I assume this is universal -already have a good idea of what others studios are producing and who the leads are.

If you're a good artist to have actually produced the work you claim, you'll get hired anyway. If you're not, you'll get found out pretty quickly.

Of course, most hiring isn't done without recommendation or checking referrals. So it's even harder to "trick" someone with false information. Overall, just a stupid move.

What spurred this post on David? Get some bogus resumes lately?

Francisco,
As we all know, this issue has been around as long as their have been resumes/bios, so I was just trying to set it in context of today's landscape of Linked-In, etc, and that we should take extra care to accurately report our work histories.

Years ago, I had an employee who constantly went through my rolodex using whatever names he could find. He then became the maker of some of the films he helped animate for me. I never complained but certainly kept this in mind when it came to hiring animators for future projects.

It's part and parcel of the business.

I probably could have boiled some of this down to: the person/studio who writes your check is who you worked for. That probably helps clarify matters a touch.

Would it surprise you to know this person did not work for EITHER Pixar OR the US Postal service?