Spinning Animation for the Web 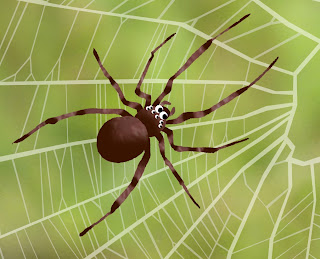 As we all know, people have been making commercial animation for the Web for more than a decade. At the beginning, Web animation was a shaky speculation. Some companies tried to use it to create a sort of TV channel-style destination, speculating with other people's money and using it to rent huge lofts and purchase cappuccino machines. Then there were individuals like John K., who was so ahead of his time that the Internet wasn't ready to play his George Liquor cartoons even on the fastest connections of the day.

Some 10 years later, Web animation is still here, thriving as viral videos made by living-room Hanna-Barberas and posted on YouTube, as acquisitions for sites such as collegehumor.com and atom.com, and as podcasts like Sesame Workshop's Word on the Street for which I have been making 30-second films.

In addition to the my Word on the Street films, I was just engaged by Stephen and Joel Moss Levinson to create a film with them for their client, an online Jewish magazine called tabletmag.com. We finished the minute-and-half film set to a song written by Joel, in one week, and I'm excited to report that it's a hoot. These quick productions have the ability to capture some of that spontaneity I was writing about in last week's post. When you work at this pace, planning and animation take place simultaneously. It's working without a safety net, and I love it!

I've already explained in a previous post how I write, design, animate, and direct my Word on the Street podcast shorts, only employing my pal Adrian Urquidez to tackle backgrounds. It's not so much wearing all these different hats that make these projects so much fun (although it keeps my head warm), it's the amount of creative freedom Web animation offers. Somehow (knock on wood) animation for the Web is not micro-managed the way network or film projects are. For instance, on the newest Sesame short, Arachnid (pictured in two stills above and below), the plan was to showcase three types of arachnids––highlighting their eight legs, pinchers, tails, and other attributes. That was fine, but it seemed a little dry. To jazz it up, I suggested that at the end of the cartoon the first two arachnids show up to celebrate the third arachnid's birthday. I knew it was an odd idea out of nowhere, but the producer loved it and ran it by the research department who approved as well. So before you can say "arachnid," I'm adding party hats, presents, cupcakes, and confetti to an otherwise straightforward cartoon. 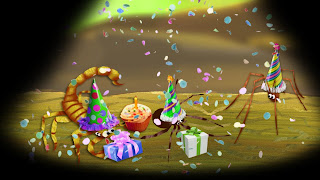 The short for the Levinson brothers was just as fun. Joel's song gave us a great foundation and, he and Stephen provided a good outline for what they envisioned for the animation. It was a very happy collaboration, one that matched the joy and fun of Joel's music and performance. I got to put a lot of myself into the piece, so much that during the production my wife remarked, "You're really coming into your own style lately." How often can that be said about work for hire? 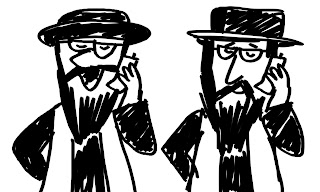 *a rabbi chats on the phone in a couple of drawings I drew for the Levinson's Tabletmag.com short.

These short and simple Web animations demand a shrewd production plan, encourage creative freedom, and foster individuality. Like all golden moments in time, I know these days won't last...but, I'm going to enjoy myself while they're here and seize the opportunity these special films afford me.
Posted by David B. Levy at 3:52 PM

They look a little anti-semitic.

Haha, Jason, very funny. Someone else told me that they look like me! hehe. : )