The Right Pitch, The Right Way 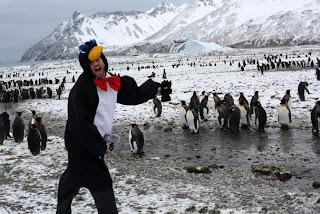 Joel Moss Levinson donned as a Penguin in one of his previous video projects.

A few weeks back, pre-flu, my new friends, creators Stephen and Joel Moss Levinson asked me if I wanted to co-create a cartoon pitch with them. Wed previously worked together on a short animated film based on Rosh Hashanah. So, I thought I'd use our new venture to create a new pitch TIP list:

-where possible pretest out a collaboration before getting entangled on something like a pitch. Our previous project proved that we could work well together and communicate effectively. And more important we had FUN working together.

-don't create a pitch for a series that you wouldn't want to work on, should it sell. The Levinsons and I like comedy FIRST so I was surprised when they expressed a desire to do an educational kids show. At first we started to go down that road, and then it immediately felt stifling to me, because we'd eventually need educational consultants and curriculum, and once you have that element it dampers down any straight out fun you can have. So I suggested we respin it as an all-out entertainment cartoon. Happily they were on the same page and we were on our way! Another tip might be you have to work with people you can be honest with, because if I didn't feel comfortable suggesting a change like this, it would have been an unhappy partnership.

But what were we going to make, pitch wise? In other words a bible? A short two-sheet proposal?

-make the pitch process work for you by making the pitch on your terms. Again, the beauty of an entertainment cartoon versus an educational cartoon is that the former can be pitched in a far looser manner where you're not so dependent on making a traditional pitch bible. Bibles are a yawn to make and to read. Besides, this is the day of viral video, so why not a three minute cartoon to show case what we can do?

That sounded right to us! So using the germ of the idea the Levinsons brought to the table, we hashed out a few key twists and improvements and just nailed down enough details to start sculpting together designs, songs, and a script.

-if you want a free spirited cartoon that is funny and fresh, you can't over plan it to death. The process should resemble the tone of the product. Otherwise you might as well be making a legal brief instead of a cartoon. To tap into that spirit we worked apart after our first brainstorm meeting. Each of us could create and show finished bits and pieces as they unhatched. It felt organic and spontaneous.

-ideally choose pitch partners that can bring other talents to the table then your own. On our pitch, Joel writes the songs, Stephen the script, and the designs are created by me. While each of us have a say on all things, we have our areas of expertise and get to offer our talents very much unfiltered.

-ideally each partner will be able to bring their own unique connections to the project to plus it creatively and also to increase it's sellability. The Levinsons have amazing ties to the comedy world and right away were able to sign up an amazing cast member to voice a key character. And once we are ready to pitch, myself and the brothers have a large pool of development executive contacts we can utilize to set up meetings or at least get eyes on our video.

-work with people as motivated as you are. Each member of the team has to treat the venture as serious project. When I was down with the flu, Joel kept on writing and recording songs and emailing them to me. Its great when the team has each others' back like this, with each member keeping the wheels rolling. In the past it took so long to make a 3-4 minute film (it used to take me 2 years), but with cheap and fast digital tools it shouldn't take us more than three months to get this film done. A short production keeps it fun without too much second guessing. After all, second guessing is an execs job, not ours. Were just out for a fun time. And if we do our job right, well have a great and funny cartoon film that is worth more than 100 pitch bibles because a film is proof of execution. It says, "Here's what this creative team can do."

And, now if you'll excuse me, one more bowl of chicken soup.
Posted by David B. Levy at 5:11 AM

I like your idea about just showing a 3 minute short as part of the pitch.

But I'm worried that if I showed a demo with scratch voice tracks, or animation or visual development that wasn't 100% what the final product would look like that it might count against you.

You'd hate to have the execs think it was totally representative of the final product.

Any tips for getting around that?

Howdy Phil,
You're right to have that concern. A sample animation that doesn't represent at least a nugget of a complete final vision does more harm than good. Anything you show has to be 100% of an indication of a final product, otherwise it will just be full of disclaimers and excuses of why the final will be better. Imagine you were trying to sell an invention in a presentation and your invention prototype didn't work at all. That would hurt your sale, right? Same for the clip of animation.

My rule of thumb, the animation should feel as if someone just flicked by your show on air sometime in season one and watched three minutes of it. That's how tight and functional an animation from a pitch has to be.

But, the trick to all this is not be play an exec yourself and second guess all you are doing. Just be a confident creator instead and try to make the best bit of animation you can and put your worry in the right place. The writing, production values, and overall feel are among the most important elements for me.