"I've Tried Nothing, And I'm All Out of Ideas." 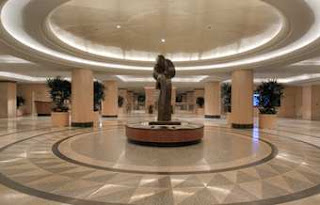 NY's Hilton Hotel Lobby, the scene of many Kidscreen Summit rendezvous this past week.

The title of this post comes from The Simpsons and was spoken in a flash back by Ned Flanders's dad who was complaining to a child psychologist about his badly behaved son. Somehow I find the joke a very apt description of our struggles in NY animation, specifically in terms of growing our studio businesses (virtual like mine, or the traditional model).

It's a crazy notion to suggest that animation people lack imagination, since our very stock and trade depend upon being to create the impossible. But, why doesn't that imagination also extend to self promotion, marketing, or branding of our talents or studio strengths? One of the reasons might be the very nature of the NYC animation scene itself. We define ourselves by not being "Hollywood." Does anything sum this up better than the Annie Awards versus the ASIFA-East Animation Festival? The Annie Awards are tuxedoes and caviar, while our festival is jeans and triscuits.

Integrity instead of glitz isn't a bad thing, but zero attention to showmanship is bad for business. I just spent four days taking meetings at the Kidscreen Summit. I didn't officially go to the conference this year, but took meetings in the lobby bar and lounge instead. Some of my pitches went over very well and some died on arrival, but, these weren't the only meetings I set up. Many animation artists, if they think about this Summit at all, believe it to be a market for execs. And while that's true to a point, for me, the Summit also represents an opportunity to meet with production studios based outside NYC. Some of the studios occasionally get work outside their areas of expertise and need to bring in help to handle those projects. This was certainly the case with the studios I met up with at the Summit, and as a result I have three new potential gigs for this year. Even if none of these come to fruition, seeds have been planted.

If arranging these type of meetings doesn't sound like your cup of tea, there was also a lot of great networking opportunities at cocktail parties held at studios such as Little Airplane, Curious Pictures, Animation Collective, and Titmouse. On top of this there was even an animation party (partially presented by the Annecy International Animation Festival) at the posh French Embassy. Networking at these events is like reshuffling the deck and continually putting your card at the top. There's no way to keep it there forever, but an even instant can work wonders. That's often all it takes for a studio or exec to see you, remember you're alive, and match your skills and talents with a project they have in the works.

By no means are these the only ways to market yourself or your studio, but these are pretty damn effective. Think about it: Relationships are what leads to work in this business (assuming you have talent/skills to do the work) so connecting and reconnecting with dozens of animation professionals and friends in a single week is pretty powerful, especially when you consider that these methods are 100% free. Even better is the fact that there's no agent or rep to split the pot with.

We have no control over the larger economy or other such conditions that effect our industry, but there are no shortage of ways to do better business. All it requires is to take a little of that imagination we use every day and sprinkle some of it on the business side.
Posted by David B. Levy at 9:42 AM