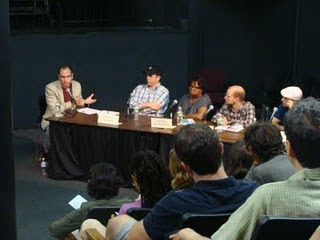 Above snap by Richard O' Connor, from last year's SVA panel launch for my book Animation Development: From Pitch to Production. Pictured in the photo from left to right are: Moi, Carl Adams, Janice Burgess, Fran Krause, and Amid Amidi.

Pitch fever is sweeping NYC animation. From my own observation it looks like there are more individuals and studios creating and pitching animated projects, series, and features than any time I can remember.

I know, some animation folk get downright irate about the world of pitching and its "unqualified executives," "needlessly slow and inefficient development process," etc. Even more folks point out the futility of it all.

Don't get me wrong, there's something to all this criticism. But, I can't help but wonder: What if series creators' John Dilworth, Jim Jinkins, Mike Judge, Christy Karacas, Tom Warburton, Jackson Publick, Soo Kim, Mo Willems, Chris Prynoski, and Devin Clark had decided not to pitch? Can you imagine NY animation from 1993 to today without the multi-season productions begat by these creators (and others)? Had they not created, pitched, and sold shows, there would have been hundreds of less jobs during this span of time. It's amazing to think the first step to all that job creation was an idea in a creator's brain or some scribbles in a sketch book.

I've been using February as a pitch month, so outside of my work commitments I'm prepping three different projects. One is a comedy for ages 6-10 with amazing designs by Phil Rynda (Chowder, Adventure Time), which were inked and colored by Adam Ansorge, that I'm pitching in a simple mini bible form. The second is a preschool series created by veteran writer Barry Harman (Carol Burnett Show, The Great Space Coaster, Allegra's Window, etc..), which I came aboard as co-developer and designer, and that we are pitching with a slick full 12 page bible. The third pitch is another comedy for ages 6-10, a co-creation with brothers Stephen and Joel Moss Levinson, which will be in the form of a fully produced short film starring some of today's top comedians, featuring original songs, and the talents of some great artists/animators such as Adrian Urquidez, Otis Brayboy, and Dale Clowdis.

The two non-film based pitches above will be pitched during the Kidscreen Summit this week. The self-made pilot for the third pitch will be completed some time this Spring and will be used as a (hopefully) viral video and the main salvo of pitch meetings in NY and LA.

One thing I have to stress is the importance of getting a second and third opinion about your work. For the one solo pitch above I made sure to show my materials to two professional animation writers not involved in the project. Without their help I'm sure my pitch would have been dead on arrival.

The biggest obstacle we creators face, contrary to all the nonsense on pitching that's out there, is ourselves. There's almost always room for improvement and it's not an ideal situation to use the networks as a place to gather those notes. They're going to have something to say, either way, but the more issues you resolve before they see a property, the better. Besides, if you let them tell you what's wrong, they also might conclude that you're not ready to create a viable pitch.

Another bit of advice I'd offer is to not take advice from those who haven't pitched or have no-to-little interest in pitching. They won't be able to offer you much, and likely if they do, it will be misinformation that they gained second or third hand. For instance, if I wanted advice on how to make it as an indie animation filmmaker, I wouldn't go to a person who only worked on commercial projects for big studios. I'd go to Bill Plympton. Not all animation people are expert in all areas.

As for these February pitches of mine, will any connect? Who knows? But, one thing I know for sure: each has been a chance to stretch skills, make new writing/design/animation samples, and to work with some new collaborators as well as some old friends. So even if the pitches don't end in deals there's a great value to the time and effort spent.

Case in point: the preschool pitch with Barry Harman has offered a whole new set of experiences. We are in process on inking a deal with a great studio that wants to partner with us to create a one minute animated teaser. The studio plans to absorb most of the cost for this mini-production, and in return we will offer them a piece of the pie of the series. Being part of the negotiations and dealmaking that will create this partnership has been an invaluable learning experience, one I wouldn't have without pitching.

Good luck to all my fellow creators developing and pitching animated shows and projects right now! Stay focused, and filter out any nonsense that comes your way. You may very well be creating the next hundred jobs in NY animation.
Posted by David B. Levy at 9:52 AM

i'll be hanging out in the bar before i have to go to work so maybe i'll see you there.

good luck to you.

Thanks, Doug! I'll look out for you. Maybe we can have a drink.

Good luck to you and your projects as well!

Hey David. I'm doing research on geographical locations in relation to working and/or animating there. I love New York (mainly due to the transportation and food) and I'd consider moving in the future. If it's not out of your way I'm hoping you might have time to answer any or all of my 4 questions below. (in any way you like, long or short.)

1)Is there an "Animation Area" that a lot of either animation studios or animators clump?

2)What are some good tips to Animators moving to new york for work? or what are your favorite things about it?

4)Is cost of living manageable for most animators starting out in entry level studio positions... and is that different for freelancers with minimal client history.

even if you just want to speak about the topic and not answer those specific questions i'd be delighted.

my email is iahloe@kcai.edu if you can find the time to reply. It might even make a worthwhile blog post. If you can't I really understand. The few animators I've emailed so far have been unable to so I know everyone is very busy! I thought I might try anyways since you've published great books on the subject, live in New York, and keep up with the ongoing animation history.

Sure, Isaac. I'll write you back in e-mail form.

I liked your comment about not taking advice from people who haven't pitched successfully.

Best of luck with the pitches.

Cool thanks! And by the way, that is some great advice on pitching. We made fake pitches last year and a lot of what we were told aligns with what you wrote

Pitching requires a level of patience that I don't think I even have. Some development executives can be down right rude and you have to still smile and treat them respectfully.
I respect anyone that can put up with that for many years. I don't know if I can. Common courtesy is a trait that shouldn't vanish just because you're trying to develop a show with a company.

Thanks for the feedback, Phil. And, for the luck!

You said it Corey. Pitching does require a lot of patience. I often take breaks from pitching just because of how soul crushing it would be to do it all the time. I've seen my share of rude execs too. But, in a way its useful to me if I learn that about them through a pitch. It tells me that they are not the kind of people I want to work with. And, that I shouldn't bother to set up subsequent meetings with them. Good execs consider the long term and want to nurture and encourage talent.