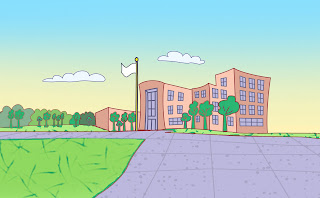 *above BG art by my dad for my Electric Company spot, My Daughter Studies Rocks and Flies.

I shared a story in my book Your Career in Animation: How to Survive and Thrive, about a mistake I made trying to "school" an employer who had years more experience than I. I thought I'd use this post to augment that story and put it into a larger context.

The story occurred during the first year of my career while working on a four month industrial animation job for a big financial firm. For a time I was the only worker on this job, besides my boss who barely did any of the actual work, seeing himself as the big-picture producer-type. My role on this job had me reporting to the animation studio and to the client (splitting my week to work in both locations) and this odd situation helped create a trap of dual loyalties.

My boss was using the occasion of this job to build his own studio, which meant he dragged me around to go shopping with him to furnish his space instead of allowing me to work to meet the upcoming client deadlines. When he did let me work, he'd disappear for the entire day and return around 5 pm, even though our deadlines were so tight that it required both of us to be working. Because of all this I felt a lot of pressure being caught in the middle––having to make excuses to the client, while knowing how needlessly wasteful our production was being run. And, of course, I felt the stress of having to carry the whole production and always having to work in a pinch because my boss didn't lift a finger.

I didn't have to be an industry vet to see the missed work would bite our production later (which, of course, it did). Yet my boss didn't seem to worry about this, and that made me worry all the more. In fact, the client worried too, and one exec used to corner me and ask, "When do you think you'll have the ________ stage done?" To which I would reply, "What did my boss tell you?" And, then she'd answer, "In four days," with a doubtful look on her face. "That's what we're working towards," I'd conclude. Then, of course, we'd blow the deadline.

I hated working this way. It's not in my nature to play games or not take deadlines seriously. Besides the moral issue, it's such a waste of energy to constantly have to spin a story or cover up the truth. I was also getting exhausted from having to schlep out of state a couple of days each week (in a long commute) to "work" in his studio.

But when the pressure and frustration built to a head I made the mistake of trying to "school" my boss, basically telling him how he was running his studio poorly and wasting my time on nonsense.

It shouldn't surprise you to learn that my words, delivered on a phone call, were not well received. In fact, I was almost fired, but a day later, my boss reconsidered and decided to give me another chance. The lesson here is not that I was wrong in my opinion or frustrations, but that I criticized my boss as if I was on the same playing field or even above him. In reality, I was less than a year out of school. Whatever his failings were as a boss or studio owner, we were not equals, and it was not appropriate for me to take the position I did.

There had to have been another way to handle this. I could have pushed for bringing in another worker to help me for a few days a week, for instance. It didn't have to get personal. The key to handling a situation like the above is to figure out what you really want. I didn't see myself working with this guy beyond this job, and since I was in no position to teach him anything any how, I should have relaxed the pressure on myself. All I really needed was a little help on the work so we'd have a prayer of hitting our deadlines.

I wasn't always so tactless in that first year of my career. Sometimes my instincts severed me well. At the end of the first day, of my very first job, working for Michael Sporn, I took home the storyboard of the pilot we were making and studied it during my long commute. The next day I arrived early and had marked some questions with Post-it Notes. I just wanted to figure it all out, to understand the storyboard and what we were doing as well as possible. Michael was very patient with me and cheerfully answered each question. Later that day he held a staff meeting during which he pointed out his delight that I had taken home the board and brought in questions that morning. So, it was a little victory for taking an active interest in the workplace without stepping on toes and going too far.

Most beginners with a passion for the art/craft of animation have to find this balance on their first jobs––how to demonstrate interest in the work or studio without crossing the line and making others uncomfortable. As seen in my Sporn story above, a good rule of thumb is to ask questions, gather information, and soak up as much as you can. In the beginning of a career, you are there to learn, not teach.

There's another reason I should have known better in my handling of the financial firm job. I had heard about another recent graduate around that time who, initially, had done very well (working at several top studios) in his first 3-5 months out of school. But, then I started hearing stories about his attitude in the workplace, in particular how he was lecturing his employers on how to properly do model sheets, layouts, etc. In truth, he barely knew anything about production, nor were his skills all that great, so it was very inappropriate for him to advise anyone on animation production. The damage to his career was swift––it took him years before he would be hired by any studio again.

To sum up, early in a career it's better to observe, listen, and ask questions than it is to spout advice, give opinions, or offer criticism. I would say this applies not only to the workplace but also to any interaction with professionals in your field with more experience than you, whether at animation events or online at social networking sites such as Facebook. Chances are, we all make some mistakes in this area, but we have the power to decide if those mistakes are learning experiences or the path to full blown self-defeat.
Posted by David B. Levy at 9:57 AM

A few years back a young, just out of school artist delivered some angry criticisms of our operation.

There's plenty to criticize but this person managed to miss the mark on everything.

They were fired a few months later for poor work ethic and attitude issues.

They've since apologized, after having worked at a few places and seeing the distinction between shops.

I got a few things from this: first, I wished her criticism was more accurate. An angry tirade is useless, but observation of things that could be improved is helpful.

Moreover, in terms of artist "management". This person may have benefited from more structure in the workplace: specific routine and duties before working up to the (relative) creative freedom we allowed. I think this offered that illusion of equality you write about.

Ultimately, though, I think the bulk of the "fault" lies with the artist in my particular case. They simply weren't mature enough to work in a professional, collaborative environment.

Nice to hear that your former employer had a change of heart on the situation once they got some distance and gained more experience in the field. That takes a big person to apologize, and makes me think this person learned their lesson.

Of course, others would have very much appreciated the freedom you were offering...but, sometimes if someone is insecure about their abilities, like many are at the start of a career, they might not know how to handle such freedom. It's a tricky balance for management too, to be able to read a new employee and see how much or how little they need to excel.