Diary of a "Lost" Film 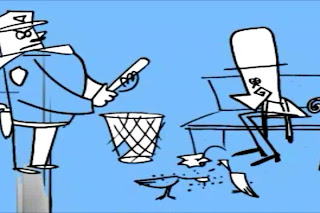 Making an animated film used to be so much more physical in the days of film. There was lots of lugging heavy artwork to camera, for instance. Back then, you felt the weight of production in your hands. One morning, in 1997, before going to work at Blue's Clues, I stood at the corner of 50th and Broadway with two heavy FedEx boxes filled with "Snow Business" cels (from my first indie film) for the camera man to shoot, and crossing the street right in front of me was Harrison Ford. Being the only one on the corner who recognized him, I winked. He winked back. Now, thanks to the digital age, we make films without leaving our living rooms, unfortunately greatly reducing the chance of bumping into Han Solo.

Since I’ve only had a tablet and Cintiq since 2007 and 2009 respectively, I wasn’t able to employ the full joys of digital filmmaking till that time. Just before this period, in 2006, I embarked on a film that I never finished. This unfinished film, which I called “Thrown” was autobiographical in that it was loosely based on me and my terrible aim. I can stand right next to the garbage and throw away some trash and miss. It’s not always the case, but it’s true enough of the time and it’s something I’ve noticed about myself over the years.

Around this time, Debbie and I were watching a ton of Buster Keaton films, which gave me the idea to try “Thrown” as a type of silent movie complete with irises in and out, and title cards. I started to get excited about the project and loosely outlined the film’s structure, doing thumbnail sketches in place of slick storyboards. I drew the animation on paper with a sharpie. I didn’t plan on cleaning up the drawings or even coloring them in. After each scene I scanned all the artwork and assembled it in After Effects.

Looking back, I can see that I felt a disconnect while working on this film, even though I was jazzed by how the animation was coming out. Nowadays, when drawing a film on a Cintiq, I can instantly view its progress as I’m drawing it, or immediately after. This makes me feel like I'm always inside the film––really living in it. The digital process is far more instant and direct and that helps keep me engaged to see a project through.

Ultimately I found myself not really committed to keep going. I wasn’t feeling it anymore, and slowly let the project die. I can’t really say why for certain. I know I wasn't really enjoying the process, and perhaps the idea for the film was too flimsy in the first place. Although personal in nature, it didn't give me the deep desire an indie needs to carry oneself through the production.
Click here to see a cobbled together cut of some scenes from the film, and note that the story is far from complete.
Click here to see a isolated test from an early scene in the film.
Click here to see a bit of the unfinished end sequence of the film.

I think every artist or filmmaker leaves behind these little detour projects that are destined to not go anywhere. But, even though this film didn’t get finished, it did help to steer me in the direction I’m in today. It taught me the joys of a looser approach, the value of having autobiographical content, and (most importantly) that even six months is longer than I want to spend on an indie short. No work, even an unfinished work, is ever wasted.
Posted by David B. Levy at 9:57 AM

Yeah - I used to look back on unfinished projects as failures, but I would say a couple of things about my own unfinished films.

Firstly, maybe the idea was taken as far as it could go. They can't all be zingers.

Secondly, you never know when the idea will resurface in a different form.

I wrote a blog about converting ideas into artifacts and then just filing them away for a later date:

As it turns out I'm developing an animated short based on an idea I shelved three years ago.

Thanks for the inspiration.
--Phil

I have one of those. It was just supposed to be an animation test of a ballerina but it ballooned into a short film project bigger than I expected. I got as far as the 3D animatics of the whole story and animation of just the first shot and then stopped. It was fun but it wasn't really a story I felt I really needed to tell.

Here's a link of the 7 second animation.

The great author, John Fowles used to have a safe where he kept manuscripts of novels. He'd write a draft of a novel and put it into his safe. He'd sart another one and put that away. After about fiv years he'd go back to the first one and read it and make changes, then put that back into the safe. From there, he'd go onto number 2.

He said it often took about five trips through the safe for a novel to be ready for sending to an editor at his publishing house.

That's an amazing blog post in your link, Phil. Thanks for sharing that!

Dennis, you hit the nail on the head in describing that feeling of "it wasn't really a story I felt I really needed to tell." That is what it comes down to, isn't it? Some inspirations are fleeting and some have enough tooth to see us through, even if we regret that choice later. I sure made a couple of films that fit that category.

Michael, great message there. I relate to that in terms of the production of my new short, Grandpa Looked Like William Powell. I had a plan in my head for the film that I kicked around for two or more years, and then a family event happened that set me in specific course for the short. Although I hadn't begun work, the planning in my mind took a sharp turn thanks to time and circumstance, and gave me the direction I needed....and a reason to make the film.

Hi Dave,
I'm an SVA alumni from 2007, graduated from the motion graphics/graphic design department. I've recently gotten involved with a start up animation studio and I'd love to ask you some questions - I'm still a novice in the traditional animation world! Is there an email address your adoring public can reach you at? If you'd feel more comfortable emailing me first, I'm Jesse and I'm holbrooklyn[at]gmail.com.

Thanks so much Dave!
Jesse

If you'd winked at Harrison Ford a second time he'd have given you a kiss.