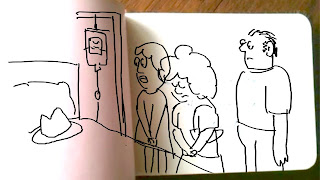 In this still from my latest short, my Aunt, Mom, and Uncle morn the passing of their father.

Something I really appreciate about getting older (besides losing my hair) is the awareness that the passage of time gives us all the opportunity to make our own "do-overs."

The subject of my "do-over" is my indie career as a filmmaker. While I’ve been making films since I’m 12 years old, up until this past year, I've never made the films I imagined I could make. Thankfully my livelihood didn’t depend upon them being successful, and even when they weren’t, they still contributed to my career path as a professional writer/director. But, the films themselves were nothing to brag about, and maybe that’s why I never really entered many festivals or worked very hard at promotion. Deep down I knew these weren’t award winners. At best they were my attempts to show various producers and executives that I wanted to be seen as a potential TV cartoon creator. That goal was paramount in my mind, far dwarfing any plans to tell my own stories, my way. It’s the difference between trying to be a “me too,” versus an “I am," and I sadly chose the former for many years.

I started turning around my botched indie career four years ago with the cheery and short “Good Morning” cartoon, which became my breakthrough film in that it was accepted into the Hiroshima International Animation Festival (and 15 other festivals), scored a distribution deal, and plays biweekly on Nick JR. But, the breakthrough element of "Good Morning," was not the film's decent success in the market. It was simply the fact that I had finally made something for me, which is very different than making something for the industry.

My new short “Grandpa Looked Like William Powell,” uses the simple graphic ideas in “Good Morning” (no background art, color, nor other fancy frills, and sports music by Bob Charde) but, this time, to create a personal documentary narrative. I’ve gone so far away from my old goal of making indie works that could be seen as commercial samples. For example, I recently showed “Grandpa” to a professional Hollywood animation veteran (someone who’s worked on major TV animation productions since the early 90s), and he remarked, “Oh, did you make this for your family?” Looking through his “industry goggles” he couldn’t understand this type of film. It doesn’t look like a TV series, typical animated feature, or anything he’d be familiar with in his world. That moment was an odd and sweet victory for me. I’d made something that could not be mistaken as mainstream––a do-over for my indie career. 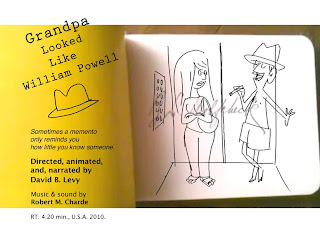 I finished my new short in late October and have entered over 50 festivals already, which is more than my previous six films put together. Serious indie filmmakers such as Signe Baumane enter up to 120 festivals per film and it is my goal to do just that. While the Hollywood animation vet found my film impossible to appreciate, that wasn’t a problem for this year’s Tribeca Film Festival jury, and I’m happy to announce that my film will be competing in the festival’s documentary shorts category. 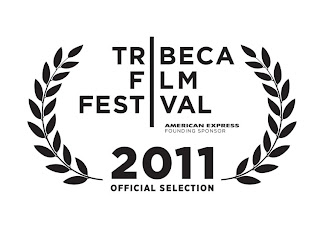 A handful of other festival invitations are too early to announce here, but I’m excited to report that three of them are Oscar-qualifying festivals, so if I win in my categories (either animation or doc shorts), I would be eligible for an Academy Award nomination. I know that’s a long shot, but the point is that I’m trying to promote this film as much as possible and finally taking my indie career seriously. I’m 37 years old now, the same age that Bill Plympton was when he made his first animated short, launching him into the career “do-over” from illustrator to animator. Maybe 37 is the magic age for do-overs? Me, and the hairs left on my head, intend to find out!
Posted by David B. Levy at 3:18 PM

Congrats, Dave! Looking forward to seeing where things go for you from here.

Congratulations on getting into Tribeca. Good luck in the competition.

I knew there was something I forgot to congratulate you on at 2 Art: Your film getting into Tribeca! Well done. Hoping to catch it during the festival.

Congrats on the news from Tribeca.

From the stills I've seen and your description - it sounds like a bunch of festivals ought to dive at an opportunity to screen your film.

Hi All!
Thanks so much for the congrats! I'll write up a report on the Tribeca experience to post in early May.

Does this mean you've given up your career as a "children's film maker" to become an "Independent film maker"? Or will you use your jobs in film making for children to finance your Independent career?

I think it's all nonsense, personally. You have only one career that started years ago. You've learned how to exploit your talents to make a different kind of film. A good film maker, whether working on an entertainment, a job, or a personal film, makes only one kind of film. A PERSONAL FILM. They have to ALL be about you - even the jobs.

Francis Ford Coppola once said that he loved all his films equally and was proud of some of his for-hire films as much as he was of other more personal projects. They all came from him and they all are of equal importance to his career.

Yes, I have only one career, but, like most careers it contains missteps and lessons... of which I like to share on some posts on this blog.

It's interesting that the moment you decided to become "I am", you also become "me too." Congratulations on your success!