Checkin' In: One of the Secrets to Getting Work in Animation 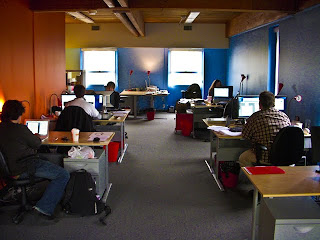 Boston's Clambake Animation, my employer on a new project. Photo by Joel Murphy.

So many in this industry needlessly stress themselves out at the very idea of networking, but the good news is that networking, even in its most simple and easy form, the occasional e-mail or online "check-in," can work wonders in any career.

A few years ago a former student from my SVA career class e-mailed me, asking if I knew of any openings anywhere. Since she had graduated, she’d attended a handful of ASIFA-East events and sent me the occasional update/hello e-mail. Even though she was an animator who’d specialized in stop-motion, she made it a point to tell me that she would also consider jobs as a production assistant on the office side of things. By chance of fate, the next week, a pal from Nick Jr asked if I knew anyone that could work in production on one of their series. So, I thought of this animator and connected her to my contact. She got the job, a position she’d keep for the next two and half years until the series’ end.

Three months ago a friend of mine, whom I’ve never worked with, and another alumni of my SVA career class, wrote me a message on Facebook, explaining that he was without work and worried about it. As a long admirer of his skills, I began to think of something we could work on together. Then it hit me. I had a pitch I was preparing for KidScreen and I needed some help inking and coloring the show art. So, I used this as an excuse to employ this artist on a little assignment, which doubled as a low-risk way to try out our work-relationship. I think it’s important to test-run potential new hires with little assignments before booking them long term. As a virtual studio, I most often work with different combinations of the same dozen artists, but I stay on the look out to add the occasional new member to the team––it’s essential to do so because you can’t always book the same crew since they are constantly drifting in and out of availability.

I’m happy to say that this artist did an amazing job! His work was excellent, his communication skills and enthusiasm top notch, and he hit the deadlines. Last week I started a new gig, directing another animated project for my friends at the Boston-based Clambake Animation, and snapped up this artist as part of my team.

Another member of my newly assembled team is an animator that I directed back on Blue’s Clues, but that recently left NY to move back to his hometown. When he moved he reached out to all his contacts to let everyone know that he was interested in freelance he could do from off-site. As much as he’s one of my favorite animator’s to work with, I wouldn’t have known he was available for this type of work if he hadn’t stayed in touch and told me.

Finally, a couple of weeks ago an animator that I’d directed on Pinky Dinky Doo wrote me (via LinkedIn) that he’d just moved back to NY after a couple of years working in L.A. And, it turns out his experience there was on a very compatible series to the work I was now directing for Clambake. Although he couldn’t have known it, the final position on my team had just opened up and I was able to offer it to him.

While all these stories are specific to my experiences and interactions, the larger point is how staying in touch can lead to opportunity for anyone. As an employer it makes it easier for me to know who's out there if my contacts stay in touch, and as someone looking for work, when I stay in touch with my former employers it helps remind them that I'm out there. During the three years since I’d last worked with Clambake Animation, we stayed in touch through e-mails, occasional lunches, etc––keeping each other up-to-date. Last week I went to Boston to work on-site for a couple of days, and it felt as if we just picked up right after our last conversation. It was so natural, in large part because we’d stayed connected between work opportunities.

All of us working in animation have these “benefits of networking and staying in touch” stories. The relationships and friendships we make working in this industry not only help us get jobs, but are also a large part of why we have so much fun doing what we do. Keeping in touch is a natural and enjoyable thing, not an icky thing, nor should it be confused with "ass-kissing" as some do. The best networking is authentic and sincere and can be as easy as simply keeping in touch with your contacts. At the very least, what have you got to lose by giving it a try?
Posted by David B. Levy at 8:29 AM