If you can learn from your mistakes... 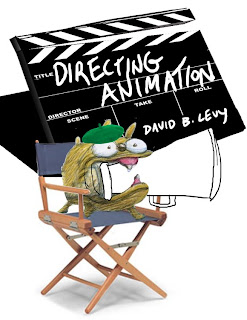 The rough design I mocked up (hijacking Bill Plympton's Guard Dog) for my last book cover. The story below could have been included in that book, but instead I'm sharing it here...

Today is an extra fun day for me because it’s my animation team’s start on a new animated series I’m directing for Boston’s Clambake Animation. The beginning of a project is an exciting time full of invention, especially when you get a chance to animate a show’s first season as we are doing. We have a killer mix of great artists working in-house at Clambake under the supervision of Exec Producer Carl Adams, Creative Director Andre Lyman, Producer Julia King, and Business partner Carrie Snyder, and a wrecking crew of six NY-area animators, that Carl has affectionately dubbed “Clambake Brooklyn.” It’s way too early to reveal any details about our series, so they can’t be shared in this post. But, I’m happy to say that it’s a great project that was written and created by top TV writers who have worked in both live action and animated hits.

Clambake and I learned so much together on our past projects, as we felt our way to making the most of our on-site/off-site hybrid productions. With the tight schedules and budgets we are used to working with, there’s simply no cushion that would afford you to make the same mistake twice anyhow. With TV animation production, you can really sense that you’re adding your stage of production to a constantly moving assembly line. This makes you have to learn to take advantage of every minute of the day and intimately know the day-to-day progress of your team, while giving them everything they need to be successful. That sounds like a no-brainer, but it certainly wasn’t the case on the first series I directed for.

At the start of my directing career I was on a hit series with a fat budget and a longish production span. But, despite those advantages, we somehow never quite took full advantage of it. I know that first hand because in this story below I was part of the problem.

One of my lead animators finished her scenes on our latest episode a whole week and a half early. It was a combination of her fine effort combined with her being assigned to a section of the episode that had few to no production hiccups or educational challenges. When I saw this talented animator was freed up I couldn’t believe my luck! Wow! Now we’d have the rare chance of having a lead animator be able to start the next episode early. In my fantasy I imagined the best pair of episodes that my team ever delivered!

But, as you can probably already guess, it didn’t turn out that way. Animators on our series would show their director work on a daily basis: during casual (and sometimes spontaneous) desk visits, or officially in a team approval viewing two mornings a week. To show work in the latter method, animators would call their team’s production assistant the night before to reserve their place the next day. The following morning the PA would walk around a hard drive (we had no networked server or ftp site back then) so animators could copy their work to a central place.

On the second day of the lead animators early start I asked her how things were going. She assured me all was fine and things were coming along. By the third day I saw she wasn’t showing me any work, either casually or officially, and at the end of that day I popped by again to ask how things were going. Again she assured me things were fine even though she wasn’t showing me anything. On the fourth day I didn’t pop by at all, but the next day during a department wide meeting I told my whole team that if anyone hadn’t shown work this week they should sign up for Monday morning approvals.

I hoped that my message would be heard, but apparently, it was not. When Monday came, she didn’t show again, and when I stopped by the next day to ask her again how it was going she again made some excuse and I backed away. This was all very confusing to me because this animator had always had a good work ethic and was a good communicator. Whatever was going on, I realized it had gotten out of hand, so I forced a confrontation the next day by asking the PA to show up at her desk with a drive to make her show work in approvals. I’m not saying this was the best or most natural way to solve this problem––it was just what I tried from my low level of experience as a director.

I should point out that during the span of days that this problem unfolded I wasn’t just waiting around my office hoping to see her work. I was busy working on 8 episodes at a time, 6 in various stages of pre-production, with 2 episodes in current production. Every day there were fires to put out, and my time was spread very thin.

Back in the story, when the PA showed up at her desk, the animator was confused and insisted there must be a mistake, so the PA came to me and asked what I wanted to do. I sent the PA back the animator, but instead of the animator copying work to the drive, she came into my office to yell at me. She was so mad that she was shaking. “Why are you on my back?” she shouted. I was so frustrated by this point that I shouted back, “Why aren’t you showing your work? You don’t work by yourself on this show. Nobody does. You’re on a team! And, part of the process is that you have to show your work to your director!” It was a very bad moment and we were both shaken up by it. Afterwards she and I each had a chance to talk to separately talk to our supervisor about it, and he supported me by saying that she had been wrong to withhold her work.

But, that felt like a very empty victory to me, suddenly, because I finally asked myself, “What will tomorrow be like?” We still had to work together. In my botched handling of the whole affair I hadn’t once thought of that. The other thing I finally realized (far too late) is how much of a partner I had been in this mess. It was my job to set the tone and provide a safe and effective workplace that would prevent any animator from getting into this situation. Instead, I’d help cause this! I gave this animator enough rope to hang herself with, so to speak, while at the same time escalating my frustration, which put all the blame on her.

Why did the animator do what she did? While that’s not the point of all this, I speculate that she felt “entitled” after finishing the previous cycle of episodes early and decided to have a slow start on the new work as a victory lap, of sorts. And, maybe that plan got away from her and before long, she was phoning it in for well over a week.

As part of the resolution of the conflict, she showed me what she had accomplished over those days and it was plain to see that this animator had only worked a day or so out of all that time. She was embarrassed, and immediately pledged to stay late and work weekends to make up for the lost time, which she did.

That was the end of the story for a long time, but years later when I was freelancing for the company she was working at; I bumped into her on the sidewalk outside their building. We chatted for a few moments before I confessed how sorry I was for this incident. “I made a lot of mistakes working with you, and I’m glad to have this opportunity to tell you how I feel.” I don’t think she was expecting me to talk about that, so our conversation ended awkwardly and abruptly. But, I was still glad and relieved to have a chance to admit my error and express my regrets.

Mistakes and missteps are going to happen in any career in animation. When it’s the director making them, the repercussions and potential damage become far worse. But, if you can learn from your mistakes and apply that knowledge forward, then no experience (no matter how negative it is) is without a positive side.
Posted by David B. Levy at 5:26 AM

Wonderful article this one was, Dave. I'm really glad you added the bit at the end about emotionally resolving the situation.

It's such a small industry that sometimes it feels as if there's a ton of pressure not to make any mistakes at all. It's nice to know that sometimes, when we do make mistakes, we can resolve them in the end.

Goodness knows we are all going to make mistakes, so owning them becomes the key. I like each mistake to count.