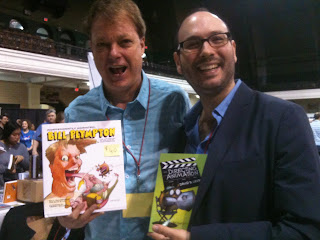 Bill Plympton and I hawking our wares at MoCCA Fest 2011.

Last week my post was about the easiest/simplest form of networking, which is the basic “check-in” e-mail, keeping your contacts up to date on your current projects and availability. And, while there’s no doubt how effective this can be, it’s best to first establish an in-person relationship, and since you’ll want to network with a larger community of people than whom you happen to already be working with, nothing beats attending animation or related events to started.

This past weekend I participated in an amazing event that brought together many amazing talents from the comics, cartooning, and animation communities: The annual MoCCA Fest 2011. My half table, which I used to sell my books, was smack dab between a writer/producer from the USA Network named Jonathan Baylis and Bill Plympton. Bill and I were thrilled that we could be neighbors because our section made for a strong animation row with nicely overlapping products. He sold two cases of our new book from Rizzoli press, and I sold my Directing Animation book, which featured his Guard Dog character on the cover. Every time we made a sale, we’d pass a book to the other to get a second signature on it. It was a lot of fun! And, it was an amazing sight to have a front row seat to watch Bill interact with his fans, scribble free sketches, sometimes while he ate an orange or crunched some potato chips. Hey, a fella’s gotta keep his strength up.

Jonathan Baylis, whom I hadn't previously met, was a great guy. And, it turned out we had a lot of mutual friends in the business. He was there selling a series of comics he wrote and self-published called “So Buttons,” all of which were based on his life experiences. I bought his latest issue for a very reasonable $5 and read it on the way home from the first day. It was full of witty and sharp storytelling. Jonathan was also an old pro at this comic convention stuff. I learned a lot by watching him interact with his customers.

As for creating a pre-event buzz, I think the award goes to my former student, Meredith Gran, and her pals Lisa Hanawalt, Kate Beaton, Sarah Glidden, Domitille Collardey, and Julia Wertz, who scored a two-page spread in the April 11, 2001 New Yorker Magazine!

On the cartoonist side, I got to reconnect with legendary New Yorker cartoonist Sam Gross, whom I met a while back when I was pitching gag cartoons to the magazine every Tuesday. Sam was very encouraging, and advised me to try again and keep building up my cartoon gag arsenal, which he reminded could be circulated to other magazines outside of The New Yorker. 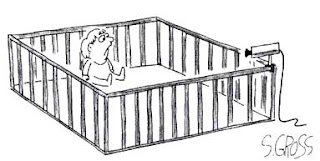 Above, a Sam Gross cartoon.

I also saw Robert Mankoff, The New Yorker’s cartoon editor, when he briefly stopped by Bill’s table before he had to dash off to do a panel. But, my favorite New Yorker cartoonist encounter was when Paul Noth stopped by my table and told me he owned my Animation Development book, and that it helped him navigate through the development process when he created a cartoon for use on the Conan O’Brien Show.

While chatting with Paul Noth it took me some time to realize that he was the same Paul Noth who’s cartoons graced so many of The New Yorker issues that arrive in our mailbox each week. He also encouraged me to try my luck again at the magazine again. Not only that, he bought a copy of my new book! 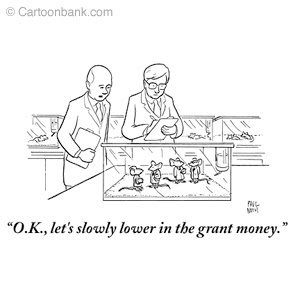 Above, a Paul Noth cartoon.

There were a lot of fun students to meet, and I was happy to learn that many of them were already familiar with my books, or at least one of them. One student came by and told me that he had two of my books on a wait list at his local library, and this prompted another student standing at Bill’s table to open his messenger bag and whip out my Directing Animation book, complete with its library binding and Dewey Decimal number from his library!

Through Bill’s connections I met some of the students from his short-lived Bill Plympton Animation School, as well as Jessica Fuller, an editor from Rizzoli Press, as well as a bunch of fine folks from The Society of Illustrators, including the organization’s affable president Dennis Dittrich.

I left the weekend with thick stack of business cards representing brand new connections, some of which bridged the worlds of cartooning and comics. You can’t meet such folks staying home. Relationships mean so much in a people-business such as animation, so while I’m glad my table made a profit, the real value of the two days live in that stack of business cards and the new connections, relationships, and potential friendships they represent. Big thanks to the entire MoCCA family, their army of helpful volunteers, and their wonderful chairman Ellen S. Abramowitz! They are already accepting applications for table space next year. Hint. Hint.
Posted by David B. Levy at 5:05 AM

And for a free comic to read you can visit here!:
http://www.sobuttons.com/kong.htm

Fantastic points David, I completely agree with them all.

I will most certainly be back again, hopefully to hang around for a bit longer than this year :)