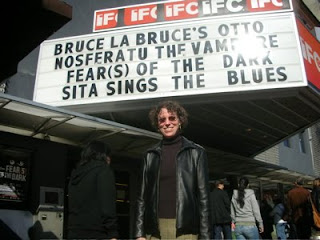 Nina Paley beaming with pride in front of NYC's IFC Theatre with her film on the Marquee. Her feature ran at the theatre from Dec 25-31, 2009.

When I wrote my recent book, Directing Animation, it was an absolute must to talk to Nina Paley for two reasons. One, she made a wonderful and practically self-funded and self-produced feature length animated film: Sita Sings the Blues. And, two, she inadvertently pioneered a new means of distribution in the process. When I asked Nina if she'd agree to an interview for my book, her one condition was that we chat on the phone instead of emailing a set of questions and answers back and forth. This worked out really well and allowed me to better explore certain areas with follow up questions. Luckily I was able to type as fast as we talked. Maybe if my animation career stalls I can fall back as a Steno.

Without further ado, appearing for the first time in its entirety, here's my interview with Nina Paley from September 16, 2009: 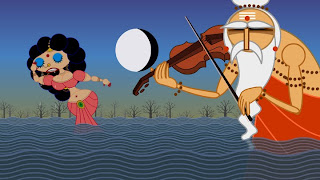 An emotional moment from "Sita," in a film chock-full of them.

1-What skill sets go into directing animation for a feature film?
I directed my computer, not other animators... so from my experience, the important part was knowing how to use and work with my computer. Sita happened magically. Its based on an old and long story. It appeared with the story structure in place, the beginning, middle and end were already there.

I wasn't sitting around wanting to do a feature. I had no intention of doing a feature film. But, I felt compelled to make it real. There's a reason I'm not making another feature. I will only do it if another idea comes along that makes me have to do it.

I get lots of ideas, so I can't possibly make all of them into pieces of art... but, some of them stick and won't go away...my next thing is a book, but not because I want to write a book.

I don't know what's a good or bad reason to make art.. there's all kinds of motiviations.... being an artist is hard, there's not really money in it... so having a motivation other then money seems good. There should be some reason to do it other than money.

2-Can you list some common mistakes and challenges that are faced by the first time feature animation director?
I only made one feature... but, I will say that one man's mistake is another man's virtue. People give you a lot of warnings about mistakes you can make... I think that sometimes the biggest mistake you can make is listening to those warnings, especially listening on copyright issues. The advice there is wrong, technically and morally wrong. Listen to your quiet inner voice instead. Sita would not have existed if I had listened to the advice I got.

3-How, if at all, is directing a feature different then directing shorts?
There were differences... I knew the story would have to be structurally different... there had to be something that held everything together. It doesn't always come together... I see a lot of features where something is just not there. Possibly I was lucky becasuse (as a solo effort) I wasn't destroyed by committee.

4-What part of directing a feature gave you the most satisfaction?
A lot of things. One thing was the commitment of it. Knowing what it was.. having a large and clear goal... Every day I felt I could work on it. There was a daily communion with art. Once I made the commitment, I didn't worry about whether it was crazy, I just did what I needed to do each day.

5-Where did you learn your sense of timing, acting, staging, and storytelling that is so essential in directing feature animation?
I was not formally trained. Probably I learned like how you learn how to talk: by listening. It's like a language. I picked it up by observing and being exposed to media. 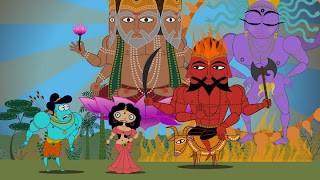 Another eye-popping moment from "Sita."

6-How long did your feature production take, how did you pay for it, and how would you describe your distribution model?
3 years of work spread over 5 years of time. I started in 2005, finished in 2008. The very beginnings of it were in 2002, as a short. I took a few breaks to do freelance work. One really great thing, once I was committed to the project and willing to be poor, I called my parents to ask if I ran out of money, if I could go back and live with them...and they said, "yes." So I had that to fall back on. I very consciously avoided worrying about the money. I had a new age approach to it that it will work out: "You'll be OK no matter what. You can sleep on peoples' sofas...people won't let you die."

I read the comments on cartoonbrew and talk to artists, and there is a real fear of starving to death, but the fact is your friends and family won't let you starve to death... even me (and I have a stressful relationship with my family). And, I will take care of others the same way.

3 ways to reckon the budget is: it was $80,000 for production costs, without food and rent. This included sound design, commisioning music, actors, dubs and prints.

I didn't think of finishing the film as a tool to raise this money. And when I was finished, I was prohibited by law to give it away for free. The law distinguishes between commercial and non commercial infringement. Either way I could have gone to jail. I cleared these things because I wanted to show it for free... There's more money in showing it for free than with a proprietary conventional distrubition model. You need a ton of money to promote a feature, and access to theatres. If you are an independent, you don't control the media stream. A film that has a small promotion budget is a killer, so many small films have been released but there haven't been enough publicity around them. Their costs are never recouped. Most feature filmmakers I've talked to have made zero dollars on the back end. Their investors paid them a salary/advance to make the film, 10 or 20 thousand dollars.

Today the only limited resource is peoples' minds. There's not enough hours in the day to pay attention to all the good stuff. There's so much stuff I want to read and look at each day. There's competition over eyeballs... over peoples' attention.

The good thing about competition is if things are good, they are likelier to... you know, quality is a kind of the survival of the fittest right now. The model we are emerging from is the winner takes all, and a few things take over everything––becoming mega popular. The execs are all looking for that... something that can be really good but only attract a small audience won't interest that old exec. In the new model you can get some kind of audience for almost anything, but it takes time and there's a lot of stuff competing... The stuff that will get eyeballs is stuff people recommend to other people. Things don't have to be blockbusters.

There were a lot of steaming turds that did fine in the three-network TV days because we all just watched what was on TV that night, but, nowadays if you make a turd, it competes with a lot of other stuff that people might like more because it's better. That's why old media has its nickers in a twist.
Posted by David B. Levy at 12:14 PM

The story structure had the beginning, middle and end in place. That's a law right there.

There are more story rules than you can imagine, most of which are invisible until you look for them - read http://www.clickok.co.uk/index4.html

Interesting discussion. As for a narrative feature film, such as Nina made, there are rules but, one could argue the only rules were the ones she made. If art doesn't obey rules, certainly the artist often sets them.

@Anonymous
Monomyth and 3 Act Story Structure is only functional with money pumped Hollywood production models. Modern Art happens when you successfully break the rules, but sometimes art pours into the mainstream (ex. Charlie Kaufman's stuff, Edgar Wright's).
It's simply the difference models - between Hollywood Mass Production against Art House. First can by enjoyed by anyone, the other is enjoyed by few.
Read Film Crit Hulk's blog for more info on the subject.