WHEN IT COMES TO PITCHING, THERE ARE NO UNIVERSAL TRUTHS 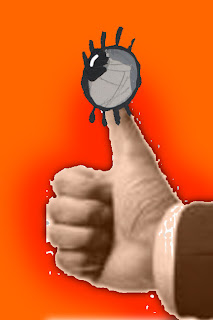 There's been so much written about the process of developing and pitching an animated series. Articles on the subject pop up frequently in trade magazines and on many popular on line destinations. In two hundred words or less, these articles attempt to stuff this whole labyrinthine subject into a shoe-size box. Perhaps more surprisingly, I've seen the same problem spring up at industry panel discussions. The danger of boiling this subject into bite sized nuggets is that just about every statement needs to be followed by opposing view points, caveats, or a plain ol' deeper explanation. For instance, I attended a pitching and development panel at the first Platform International Animation Festival where I heard Nickelodeon development executive Peter Gal remark, "If it's your first deal there's not much point to negotiating. It is what it is." I heard this point and immediately thought of my network deal, on which, the ink was still fresh. My wonderful lawyer and I had negotiated and (through that effort) significantly improved the deal financially and otherwise. After the panel I pointed this out to Peter and he wisely responded, "Well, no, that wouldn't apply to you because you're established." Even though this is my first network development deal, I do have a twelve-year (and counting) career as a storyboard artist, animator, designer, illustrator, author, and director. We are each the sum of our experiences and that's got to count for something.

On the same panel, Cartoon Network development executive Heather Kenyon playfully warned the audience to never sing during a pitch. In my experience, I've heard at least two others echo that advice. In fact, I’ve heard of one creator who regularly creeps out development executives by reciting poems and singing. However, Peter Gal, disagreed and explained that he recently bought an idea from a singing pitcher. Further adding to the argument, newcomer Pen Ward successfully pitched two cartoon shorts to Frederator while strumming his guitar and singing.

Another oft told "no-no" concerns bringing food to a pitch meeting. What if you bring dairy items to someone who's lactose intolerant or snacks that may contain peanuts to someone with a peanut allergy? Several development executives have advised against taking the chance. I'm immediately reminded of Mo Willems wowing his pitch audience for Sheep in the City with delicious French Fries. In another food related encounter, Blue's Clues co-creator, Traci Paige Johnson, wrote a thank you note on the top of a pizza box that helped secure her a place on a creative team with Todd Kessler and Angela Santomero, where the three of them would collaborate to create the mega smash hit, Blue's Clues. This is all enough to give us food for thought. Yet, I think both sides of this debate would agree that if your pitch meeting involves food, it should never be the main course.

Another example of this phenomenon occurred at an ASIFA-East event celebrating Frederator's launch of 39 new cartoons. Serving as the moderator of a panel, which included Frederator executive producer and president, Fred Seibert, and several of his short's creators, I introduced the topic of pitching in storyboards versus the traditional mini bible. The method of choice for Frederator is that would-be creators pitch their ideas in a storyboard form that is essentially the film before a film is made. The characters are shown in action, activated by a plot, which hopefully, springs out of the character itself. This method is very direct and I can see why it appeals to Frederator, who (with their order of 39 cartoons) was in the business of making shorts, not series. The problem is that Fred and, in particular, shorts creator, Alan Goodman, trashed mini bibles out right, not just in light of their particular business needs at that time. An impressionable new comer to the world of pitching sitting in the audience might have walked away believing Frederator's point of view as a universal truth. A mini bible is, in fact, the pitch document of choice at just about everywhere besides Frederator. A good series bible contains lots of splashy show art (eye-candy), and succinct fun-to-read descriptions of the characters, the world, the rules of the world, and some episode synopsizes. The storyboard pitches I toiled to create during a year for Frederator were useless pitch documents elsewhere. It was not until I scrapped them and started over with traditional mini bibles did I score my first network deal.

I don't suggest that it's a waste of your time or energy to read pitch articles or to attend industry panels. Just process everything you hear with a grain of salt. Maybe two grains of salt and be sure to throw them over your shoulder for good luck. It's my hope to help spread a better understanding of this business that goes far beyond a sound bite or snappy flippant answer.
Posted by David B. Levy at 2:58 PM

David, I couldn't agree with you more. There are NO absolute truths in pitching, even to Frederator.

I'll say here what I think I've said to you in person many times; if I missed saying at the panel, it's a bad oversight. No doubt when we ask filmmakers for storyboards --*and* trash bibles-- we know the board is often less useful at other places. We try and let all filmmakers know we know, and we absolutely understand if that work is something they'd rather not do for us. It's a choice for someone to come to us with their idea, as it's our choice whether we all ought to work together or not.

We don't like to waste people's time, and it's a shame when they feel the process with us has not been productive for them.

Like you said there are no absolutes, on any side of the table. The best thing to do is be confident that your pitch method is the best way to convey the film you most want to make.

Never put something together just to get a deal, that's the waste. A deal is nothing, a film is everything.

Thanks for the comment, Fred. All good points and thoughts. And I couldn't agree more that it is a waste of time to pitch just to try to get a deal.

Its a special thing when an idea comes to you and doesn't let you move on until you fully execute it. Those are the ideas to nurture.

I think the big danger is when people pitch in an attempt to generate work for themselves. That's a fools game. And, I don't see how that could lead to honest heart-felt projects.

The key, I've learned, is to not give away your power to any one network or opportunity. If it works out, great.. but, the outcome should not determine your creative worth nor does it prove that the development executive was right or wrong.

The irony is that the success or failure of networks /development programs may be determined more by what they let get away then by what they pickup.