Making a Living Versus Living 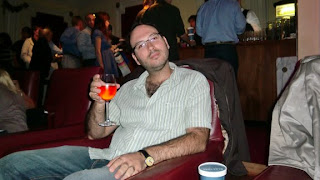 *Enjoying a movie at Notting Hill's Electric Cinema. This is the only way to see a movie...

My wife and I just flew back from a week in London and this is where I could write, "and boy are our arms tired." While we were planning this trip, some of my NY animation friends asked if I was going to set up any animation meetings while we were there. That was the furthest thing from my mind, but our trip was not completed unconnected to animation.

For one thing, our friend Sophie Lodge (a London-based 3D animator who animated on Peter Jackson's "King Kong," and "Return of the King,") lent us her flat which was smack in the middle of Knotting Hill. No, we never did bump into Hugh Grant but, we did see actor Josh Brolin at a screening of "Inglorious Basterds" at the neighborhood's Electric Cinema. The movie theatre is a restored 100 year old cinema with the seats ripped out and replaced with cushy individual leather armchairs. There's a full service bar, posh snacks, and terrific popcorn to boot. I highly recommend it.

This vacation was a chance for Debbie and I to be tourists and catch up with our friends Sophie Lodge, Steve May, and Yasmine Ismail, all animators who we had first met at the Hiroshima International Animation Festival the year before. But, the week long trip did not devolve into a 7-day shop-talk. We are all friends first and connected by animation second. And, Debbie and I were deeply grateful for their hospitality and generosity. With their advice (along with the recommendations of Justin and Emma Simonich) we took a boat ride up the Thames to Greenwich, explored Kensington Gardens, wandered the British Museum, walked through the creepy and claustrophobia inducing Sir John Soane's museum, stared history in the eye at the Tower of London, and dashed around the tube using our multi-ride Oyster cards (their version of the MTA's metro-card).

We also traced the steps of Jack the Ripper in White Chapel (where we enjoyed Indian food and the London take on the Bagel– spelled Beigel), had amazing Thai food in Notting Hill, and walked the bustling Saturday market at Portobello Road. And, to top it off, we rode the London Eye, filled our mouths with fish, chips, bangers and mash, and washed it down with more hard ciders than you could shake a stick at (Assuming that some like to shake sticks at their drinks.)

But, back to the assumption that this trip would include official animation meetings. I think that suggestion says a lot about us animation artists. We are a lucky lot. Even our getaways might be thinly veiled excuses to set up meetings, pitch projects, and otherwise network. For many of us, animation is more than just what we do for a living. It's much deeper than that. It's a passion that doesn't die at the end of the work day. But, while this may be true much of the time, it shouldn't be so all of the time. As Nina Paley said in a quote from my first book, "There's making a living, and there's living." So, to paraphrase Nina, not everything is animation. Either way, when you work in the creative arts, your personal experiences become a part of you that will come out in your art.

We had an interesting experience taking in the play "A New World–A Life of Thomas Paine," at the famed Globe Theatre. As Americans it was a bit odd to be sitting with a mostly British audience and seeing a recreation of the American Revolutionary War, including such shouted lines as, "The hated British!" It was like being privy to a mirror view of American history that we wouldn't normally see. The focus of the play was not the great success of a noble cause but on how Paine's idealistic notions were exploited by the American rebels and later, the French revolutionaries, to serve their own causes.

But, sadly, the play managed to take all this history and make it a very dull ride. There were bright moments (in particular a wonderfully full blooded Ben Franklin) but, the problem was that this Paine was a one note character who could not sustain the four hour ride. According to the play's author, Paine ate liberty for breakfast, freedom for lunch, reform for dinner, and compassion for dessert. I wondered, did Paine ever play cards, go fishing, speak on other topics besides changing the world? Near the end of the trip I began to read Bob Dylan's autobiographical "Chronicles: Vol.1" (2004), and at one point, Dylan notes that nobody ever wrote a song about Al Capone because he was a one-note character in real life and not full of the nuances needed to make a good subject for a folk song. The animation equivalent of this problem would be to think that to design a character is the same as writing a character.

The "living" that Nina Paley speaks about is why one can connect and be enriched by such things as travel, theatre, and literature––three things one might miss if everything is animation.
Posted by David B. Levy at 5:45 AM

You didn't do any animation meetings! Tsk. Tsk. Your accountant will be furious, the IRS delighted.

I took a trip to London several years ago and found it very difficult to meet with animators or visit studios. They just weren't interested -except for the Americans I already knew there.

The atmosphere is different there than in New York. It was treated as strange that someone would even want to make a social call.

Oh, and I meant to add that Prince Buster has a great song called "Al Capone". It's Big Beat/early ska so right around the time of Dylan.

Your observations on London's animation scene reflect that of another friend of mine who lived/worked there for a while. I wonder if any city has an animation scene as informal as what we have here in the NYC area.

Thanks for the tip on the Al Capone song, too.

That other friend of yours was quite surprised to find both animators and studios interested in what animators are doing.
I suspect it has something to do with the enterprising nature of the American people and I thank you all for it.

Long ago, you mentioned in a blogpost that Nick or CN in London had good success cultivating a team within the company who were developing stuff.
I'm not sure they've created this system for the right reasons...

Glad you got to go on vacation. Much deserved. btw, I grew up in New Rochelle, NY...a few blocks from Thomas Paine's cottage. Appreciate it much more now, than as a kid...

p.s. the Dylan book is great! Much like his stream-of-consciousness non-interviews

I had almost convinced myself to spend the night in tonight and work on some animation-related projects. But now, inspired by your post, I'm going to go out and get drunk with friends. Thanks!

I'm with you, Dave...I will take exploring a new city + hanging out with new friends over pitch meetings + studio visits any day.
ROC, that prince buster song is pretty awesome!

Sounds like you had a really great time! I have a rule about vacations - keep the email, the facebook, and the work at home. No news, little tv. I do have my phone on me, but most people seem to respect the work/life balance. It's not a vacation if you don't leave your life behind :)

"You have your life and your work, and you should get the two as confused and mixed up as possible."

Good point.. and I think its inevitable that the two do become confused and it's not always a bad thing.

Since I use some "vacations" to attend festivals, I really try to make real vacations devoid of work... but, it's not always possible to strike the balance. But, I do try.

Wow! i can't believe i got a mention! I feel like a celebrity.
It is a shame that the London studio scene appears much more abrupt and unfriendly than that of NY. However, if you ever want to pop into my studio you would be most welcome. We like to keep it friendly at sweetworld. I would LOVE to come to NY and sample your hospitality! Maybe I should book a trip?
Was really great to see you and Debbie, even if it was just one evening. When can I see your new films?

Hi Yas!
I'm sure things are friendly at your studio, Sweetworld. And you should visit NYC anytime. Debbie and I would love to see you and can introduce you to a ton of fun NY animation peeps.