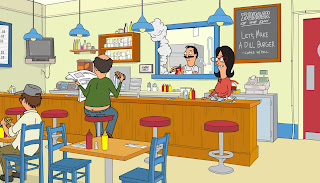 In my last blog post (scroll down if you're curious) I wrote about the increase in NY animation talent leaving town for other opportunities. I am firmly in the I "heart" NY camp, so I don't see myself leaving anytime soon. Instead, I try to use networking opportunities to bring work from outside of NYC to me. This lets me sometimes work for clients in faraway places without moving my life, and because I run my own home studio, it doesn't even require putting on shoes.

Right now I'm bidding on a job from a Texas-based firm and writing for a studio in Vancouver. In the past three years I also tackled series work, and a pair of pilots for studios in L.A. and San Francisco. The latter of which, I'm proud to say, has just spun into a full-fledged series coming this fall to Fox prime time: Loren Bouchard's Bob's Burgers (pictured above.)

I first met Bouchard when we were both jury members at The School of Visual Art's senior film show (The Dustys) in 2002. Being on a film or festival jury is a great opportunity to meet folks from diverse backgrounds or areas of expertise. This was important to me, especially since I was smack in the middle of my eight-year entrenchment at Nick Animation, where I worked with the same set of people for a great span of time. Bouchard was then living in the Boston area and working at Soup to Nuts (now owned by Scholastic) where he had a key role on such shows as Dr. Katz (my personal fave), Home Movies, Hey Monie, Science Court, and more. Later he branched out on his own and opened up a small studio in San Francisco, where he landed a series on Adult Swim, the 3D computer-animated Lucy Daughter of the Devil.

One of my favorite networking stories is from Codename: Kids Next Door creator, Tom Warburton, who, at the start of his career, wrote articles for ASIFA-East about local studios, thus putting him in direct touch with most of the employers in town. Much the way Warburton started his career, I've used the interview and research stage of my book projects as an excuse to meet or reconnect with some of my heroes. So while I was writing Animation Development: From Pitch to Production, I naturally thought of Bouchard as a good interview subject. Our reconnection dovetailed with his plans to test out a possible After Effects production model for a hypothetical future season of Lucy. Knowing that I worked primarily in AE, he brought me onboard as a consultant to help try out his new process/pipeline. It was only a couple of days of work but it was a good test of our working relationship.

After that we stayed in touch and a few months later Bouchard called with the great news that he scored a green light for his own prime time Fox network pilot. He asked me about the possibility of animating his pilot in the After Effects. I was very excited to be hired to supervise the animation production as it's lead animator, for which I also helped build the pipeline and process, find the crew, as well as schedule and assign the animators' work.

I rounded up six great NY-based animators for Bouchard to check out and he selected those that best matched his vision for the pilot. Joining me to animate the Bouchard's two month pilot production were the excellent animators Dale Clowdis, Dayna Gonzalez, and Hilda Karadsheh.

Bouchard directed us from San Francisco where he was encamped with a small crew, including the pilot's producer Ralph Guggenheim. New York animation is so dominated by preschool work that it's wonderful to have a chance to stretch your creative legs on something like a Fox prime time pilot for an adult audience. Bouchard's script was top notch, his voice actors were made up of a who's who of today's top comedians from stand up and improv, and the guy did his own musical score! Talk about talent...

Best of all, Bouchard had a complete vision for what he wanted out of the animation and explained it to us at the launch of each sequence. Whenever my animator was to start a new section, we had a three-way conference call so he could relay his vision for the action (including acting notes, story points, scene blocking, and comic beats). He preferred limited movement where a character only moved when it was funny or when absolutely necessary. Once an animator turned in a first pass, Bouchard followed up with detailed notes containing frame specific instructions, along with lots of appreciative compliments and encouragement. Our New York crew, each working from home, felt like part of a real crew. It was a dream scenario in every way.

We were all pretty blown away by how good the pilot turned out, so, it was no shock when we got the news that Fox picked up Bob's Burgers for a 13-episode season. Although Fox insisted that the project be animated in Los Angeles and Canada (where they were already set up to handle the series order), thus leaving New York out of the series production, we in the NY crew still shared in his victory and were very proud to have this pilot as part of our legacy.

Anyone can grow opportunities where you get a chance to work with new people from different parts of the country (or world) on exciting projects like this one. Networking is not only a survival skill, it's part of what makes this business fun. After all, who wouldn't want to schmooze with like-minded individuals working the same field with the same interests? Besides, without networking, us work-at-home folks might be pretty darn lonely.
Posted by David B. Levy at 6:53 AM

On an unrelated but related topic -if animation was treated equal to all other programming you'd be a DGA member.

If you were a DGA member you would get a hefty fee every time any new episodes of the show are made even if you had nothing to do with them -just for having directed the pilot.

Congrats on the success of the pilot!

I really think that with the advances in technology, this is really going to be such a strong asset to any up and coming animator (especially in new york). The idea of satellite studios and working remotely was something I never could have even thought of when I was coming up in school, but its great to know that although LA might be the mecca of animation to some, great art can come from anywhere! Really enjoyed this post.

Love the artwork! It's really playful.

I'd love if if you could check out my blog sometime... I'm no fledgling artist, but I throw in a few doodles for fun. withmosnters.blogspot.com

Nice one. For about five minutes I felt less lonely.